The Strathdon Blackpool Simply a nice place to stay

The Strathdon Guest House, Blackpool have received many achievements during the past few years, including awards from Trip Advisor, Visit Britain and Blackpool in Bloom. We hope to receive many more achievements in the near future.

The Strathdon Guest House, Blackpool has been assessed for the sixth year running by Quality in Tourism through Visit Britain and has been given FOUR STARS for guest accommodation.

Their executive summary states “hospitality scores highly with a warm welcome received and the owners make guests feel at ease, the standards of cleanliness are also high and deserve praise”.

The Strathdon Guest House is situated towards the middle of St. Chads Road; 1st prize winners in the category “Street of the Year” in the Blackpool in Bloom 2011 competition.

Fantastic news, St. Chads Road have been rewarded 1st prize in the category “Street of the Year” in the Blackpool in Bloom 2012 competition, that means we have claimed the prize two years running. 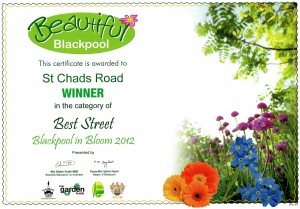 The title of Blackpool’s Street of the Year 2015 was awarded at an Awards ceremony at The Imperial Hotel, Blackpool on 20th June 2015.

The award was received from Blackpool Council and Blackpool Civic Trust.